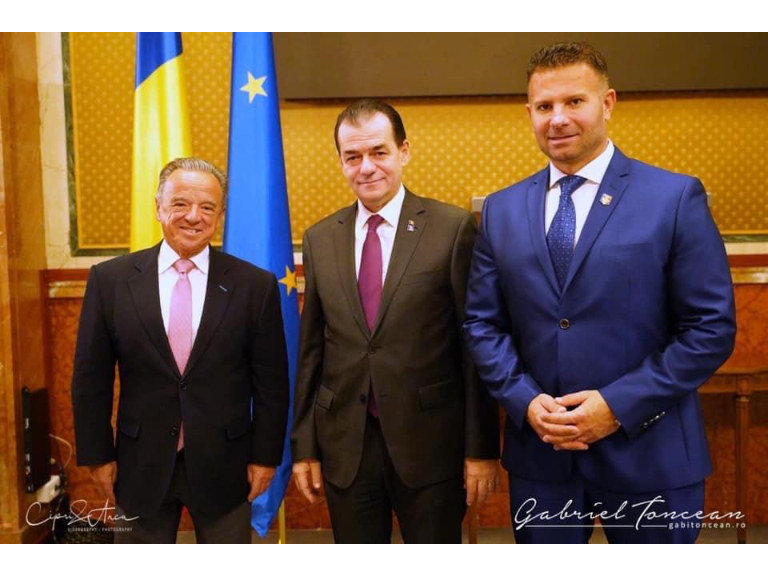 President Santonja has traveled to Bucharest, the capital city of Romania, welcomed and joined by Gabriel Toncena, President of the Rumanian and Balkan Bodybuilding and Fitness Federations, to meet with sports dignitaries and the Romanian Federation.

President Santonja and President Toncean were honored to visit this morning H. E. Ludovic Orban, Prime Minister of Romania, a great and experienced European leader, holding a very interesting meeting, having a nice chat about the role of fitness lifestyle in education for youngsters and overall population, and in the follow up of our sport National and International activities.

The morning continued at the National Olimpic Committee headquarters, meeting with Mr. Mihai Covaliu, President of the Romanian Olympic Committee, former Sabre (fencing) Olympic and World Champion, now performing a dynamic executive leadership. This visit was a nice opportunity to thanks Mr. Covaliu for his support to Romania federation and IFBB, following as well the progression of our sport in different regional activities of the Olympic program, being as well informed of the next coming international events in the country, as the IFBB World Junior Championships and the European Cup that will take place next October 23rd-25th in Cluj Napoca. In the meeting, President Covaliu also provided his guidance and extended his support in our relationship with the Olympic activities.

The morning ended with a visit to Romanian Parlament, an impressive building, the second largest one in the world (just after the USA Pentagon).

The afternoon followed with a visit to the Ministry of Sport, H. E. Ionut Stroe, a young and energetic politician, coordinating agendas on matters of common interest, in education, antidoping and others, following up also with him the progression of our sport in the country, and the organization of the IFBB World Junior Championships and the European Cup 2020.